How to Make a Cancer Patient Smile 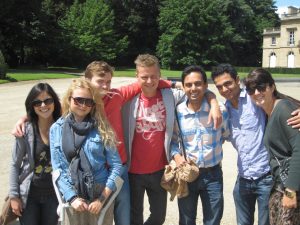 When I had cancer, I had a crew that helped me through the most difficult and steepest bike ride of my life. We hadn’t trained for it, and yet they knew exactly how and when to take action by cheering me on, giving me a gentle push, letting me draft from behind, and by giving me both massages and power bars.

My friends understood that I was two people, both a cancer patient and a teenage girl.

They quickly grasped that these two parts of me needed to be seen, heard and aired. The cancer patient needed not only comfort, she also needed to laugh a little in between. She enjoyed being teased and joking around. And my inner teenager was focused on precisely the same things that my friends were: parties, having fun, and rebelling against our parents … And my teenager could also get set off by the littlest things.

My friends said many wonderful and encouraging words to me while I was sick. I have compiled three of the best comments here. If you know someone who is facing a challenge and you would like to contribute something good, feel free to borrow a comment from my list. ☺

Wanna go? I’ll come and get you.

While I was getting chemo, I dreamed of living a normal teenage life like my friends. Too often I was coping with side effects when they were at school or celebrating birthdays and events. But on the occasions when I had the energy and health to go with them, they, like magic would appear. They included me. And they never ceased calling to ask if I wanted to join in.

I am just going to drop by …

When you have cancer, you don’t call people up asking them to come over for a visit. First, there just isn’t the strength. Second, you have nothing new to share — you’ve only had chemo on your plate. What fun is there in talking about that? Third, chemo treatments make you a miserable hostess. But my support crew didn’t care in the least. They just came of their own volition. To my house. To the hospital. When I was in good shape. When I was groggy. They gave me no choice. Today, I love them for it.

After I had surgery, I was in a wheelchair for several months. My legs were stiff. I couldn’t even make it to the bathroom by myself. That didn’t faze my support crew. They’d push me in the wheelchair and carry me up and down the stairs. I never became a problem, and that feeling was so needed and liberating.

My support crew helped me face the greatest challenge of my life by treating me as a whole person.

Today I often think about how I might be part of someone else’s support crew.